You're using an unsupported browser. This site may not look optimal.
How can our past inform our future?

At the annual Beaux-Arts Ball, one-upmanship in costumes was the rule of the day. In 1931 William Van Alen and some friends dressed as buildings they had designed, and the resulting portrait has become a defining image of New York’s architecture world at that time. From left, A. Stewart Walker as the Fuller Building, Leonard Schultze as the Waldorf-Astoria, Ely Jacques Kahn as the Squibb Building, William Van Alen as the Chrysler Building, Ralph Walker as the Wall Street Building and Joseph Freedlander as the Museum of the City of New York.
History

Beginning with the lofty civic ideals and wild parties of the SBAA’s founders, the organization has played a role in shaping American architectural culture.

As the Beaux Arts Institute of Design and then the National Institute of Architectural Education, it used competitions to established educational standards that went beyond a single school or region.

When the organization renamed itself in honor of William Van Alen in 1996, it brought new focus and energy to the debate about improving the public realm.

As Van Alen Institute identifies the pressing challenges of tomorrow, we’re revisiting some of the issues, projects, and people that brought us to where we are today. We’ve been looking through our rich archives and talking to the people who have been involved over the years, and will be gathering all of these fascinating histories and highlights into a book that will be published in fall 2015.

We’ve developed a series of events to bring this history to life: Each one will jump off from a moment, document, or idea we’ve discovered in our archives and bring together historians, activists, critics, students, and practitioners from the Van Alen community to join in debate about those same issues today. 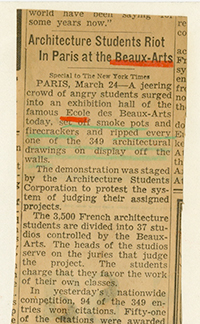 “How’s the Revolution Going?” Rethinking Architectural Education from ‘68 to Today

As the social movements and protests swept the country in the 1960s, architecture students played their part, and demanded that the walls of the academy be broken down to let the city in. In June of 1968, the NIAE hosted an event asking how architects and architecture schools should respond to the urgent problems of the cities around them, and how to reform both architectural practice and architectural education. The issues they raise seem familiar to us today: Open storefront schools to engage neighbors, focus on multi-disciplinary approaches to social and ecological challenges, and use design thinking to address problems of every scale. Were the changes they fought for enough? What are the pressing issues that architectural education needs to focus on today? 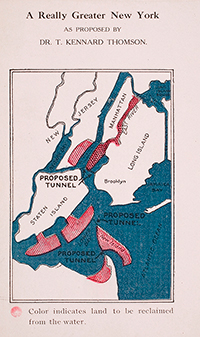 Thinking Big: Competitions at the Scale of the City

The problem presented to young architects for the 1913 Paris Prize was a staggering one: After the East River had been filled in and Manhattan was no longer an island, its southern end would need a fittingly monumental entrance. Today, forward-thinking cities are restoring their waterfronts, not paving them over—look at 2013’s Rebuild By Design. But the need to imagine large-scale, transformative change in a visual and public way remains. What are the opportunities and limits of the competition model to address the pressing social and ecological challenges of tomorrow?

Our Drawings, Our Selves: Architectural Representation from 1894 to 2015

The drawings in Van Alen’s are a dazzling time capsule spanning more than 100 years: From the meticulous Beaux Arts esquisses in from the turn of the century to the drive-ins of the 1950s and Consciousness Centers of the 1970s, each tells a fascinating story about their cultural moment. And while the tools architects use to make drawings has changed, their centrality to practice has not. Or has it? What do the images we make today tell us about practice, about the world we live in?

From archival research and  interviews with key figures from Van Alen Institute past and present, we’ve curated an online exhibition with images, videos and artifacts describing how Van Alen Institute evolved to what it is today from its Beaux-Arts roots over the course of 120 years.

As part of the 120th Anniversary project, we’ve been interviewing key figures from Van Alen Institute’s past and present.

Watch some of the best moments from our interviews below!