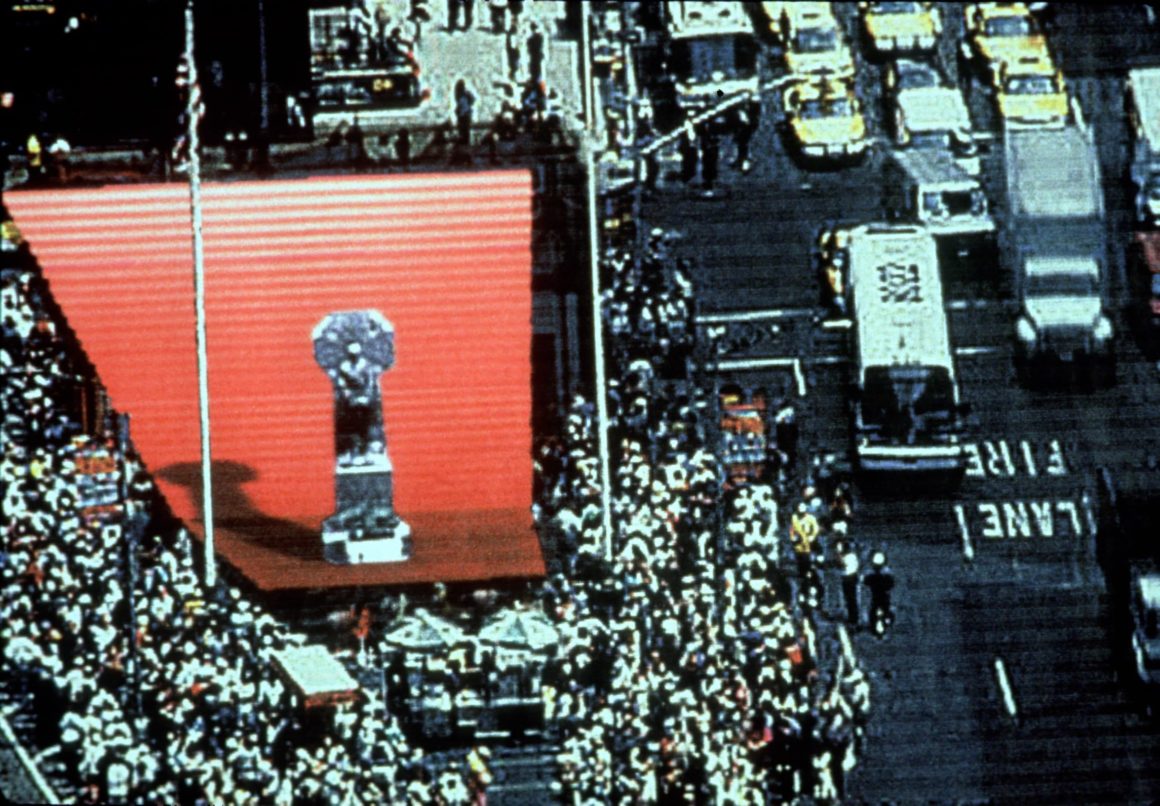 What’s the ticket to taking Times Square from spectacle to streetscape?

Times Square is the most illuminated, walked upon, televised and recognized intersection in New York City. It is a place familiar even to those who have never set foot there—the quintessential symbol of the city that never sleeps. In the center of this kinetic landscape lies a small triangular traffic island known as Duffy Square, home to the statue of Father Francis P. Duffy, a World War I military chaplain who later became rector of Holy Cross Church, just west of Times Square. In addition to the statue, Duffy Square is the site of the TKTS booth, where over 47 million discount theater tickets have been sold since it was first built in 1973 by the Theater Development Fund (TDF).

Despite the success of the original TKTS booth, it had been designed for temporary use and, by the late 1990s, time and weather had taken their toll on the structure. Theater Development Fund’s expanding operations additionally demanded a more efficient facility, and redesigning the TKTS booth would provide the opportunity for streetscape improvements and ensure that the Father Duffy statue, long overshadowed by its flashy context, would receive the respect it deserved. In 1999, the Theater Development Fund and the NYC 2000 Millennium Committee joined with Van Alen Institute to issue an open call to design a new TKTS booth—one that would continue the legacy of its predecessor and perpetuate the vibrancy of its surroundings into the new millennium.

The competition presented a number of complex challenges to designers. The new booth was to function as a sign, capable of grabbing attention and relaying information without overpowering the statue. The structure was required to accommodate two dozen staff in less than 1000 square feet, as well as lines that frequently stretched several hundred feet long on a sidewalk shared with everyone from tourists to street entertainers to passing office workers. And it all had to fit into an extremely tight urban context, with no room to build up, down, or out.

Response to the competition’s call for submissions was unprecedented: 683 entries from 31 countries made it the largest architectural design competition in New York City history. The jury described the creativity exhibited in the designs as awe-inspiring, ranging from a booth conceived as twin green crystals to a three-dimensional rendition of Mondrian’s painting “Broadway Boogie Woogie,” and from hand-drawn renderings of Beaux-Arts pavilions to cutting-edge proposals that tested the limits of computer modeling.

“What was so exciting was that the mandate of the competition was so very simple,” said jury member Marion Weiss. “It didn’t ask for consultants, it didn’t ask for cost estimates or fancy models. The possibilities for expression were extraordinary—and it’s one of the most provocative settings in the world.” Entries were presented in two respective exhibitions at the Urban Center and Van Alen Institute in early 2000.

Graphic iconography emerged as a dominant theme, and the red bleacher topped proposal submitted by Australian architects John Choi and Tai Ropiha was selected as First Prize for its artfully achieved yet simple drama. Construction began in 2006, the 135th birthday of Father Duffy. New York firm Perkins Eastman made Choi and Ropiha’s winning entry a reality, using glass as the steps’ sole structural element. The plaza surrounding the TKTS booth was redesigned and rehabilitated by William Fellows Architects (subsequently working with PKSB), who collaborated with the other two teams to expand the edges of Duffy Square for a 37 percent gain in space, repaved the square with illuminated panels set into granite, and tore down the fence around the Father Duffy statue. In July 2007, the project was honored by the Art Commission of the City of New York for design excellence. The project officially opened on October 16, 2008.

Jed Bernstein, President, The League of American Theatres and Producers 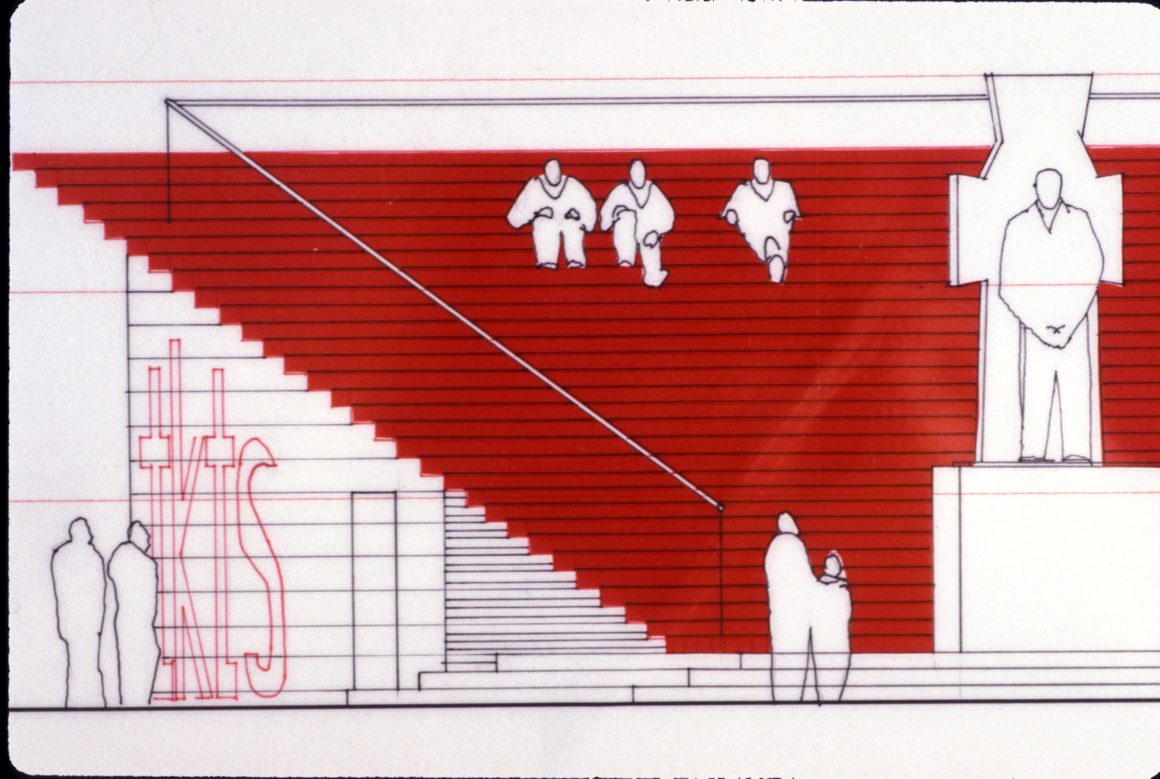 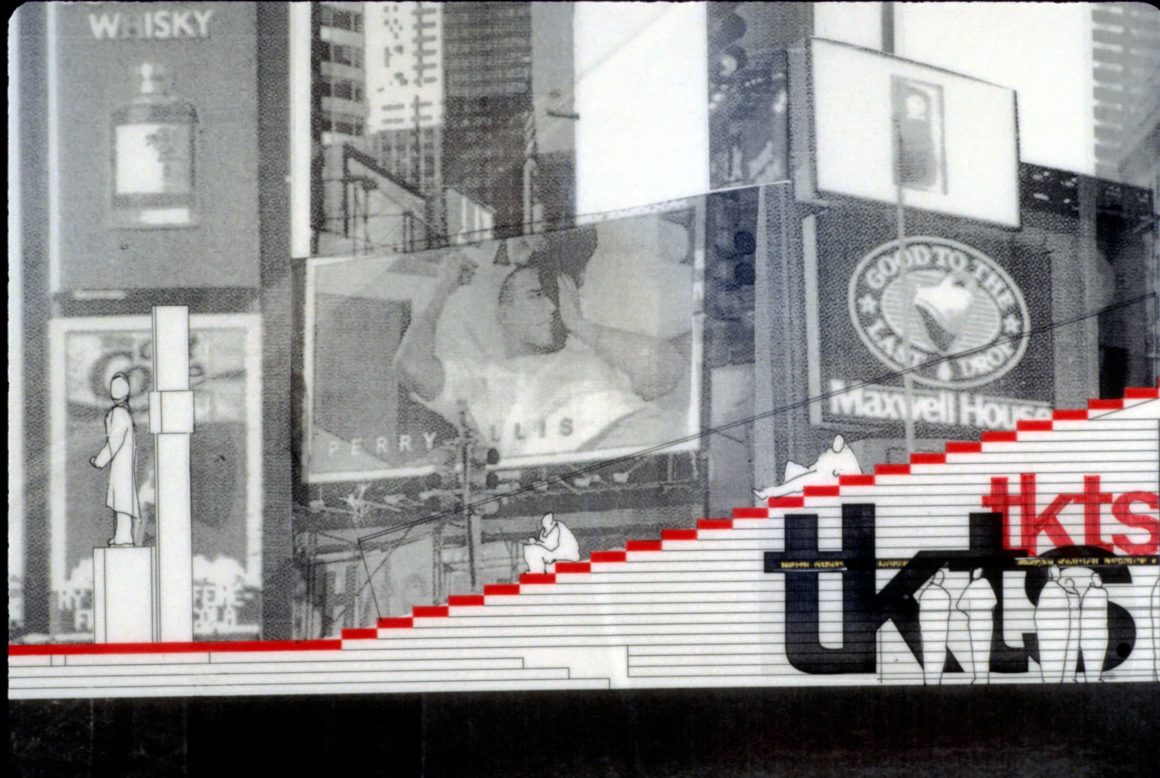 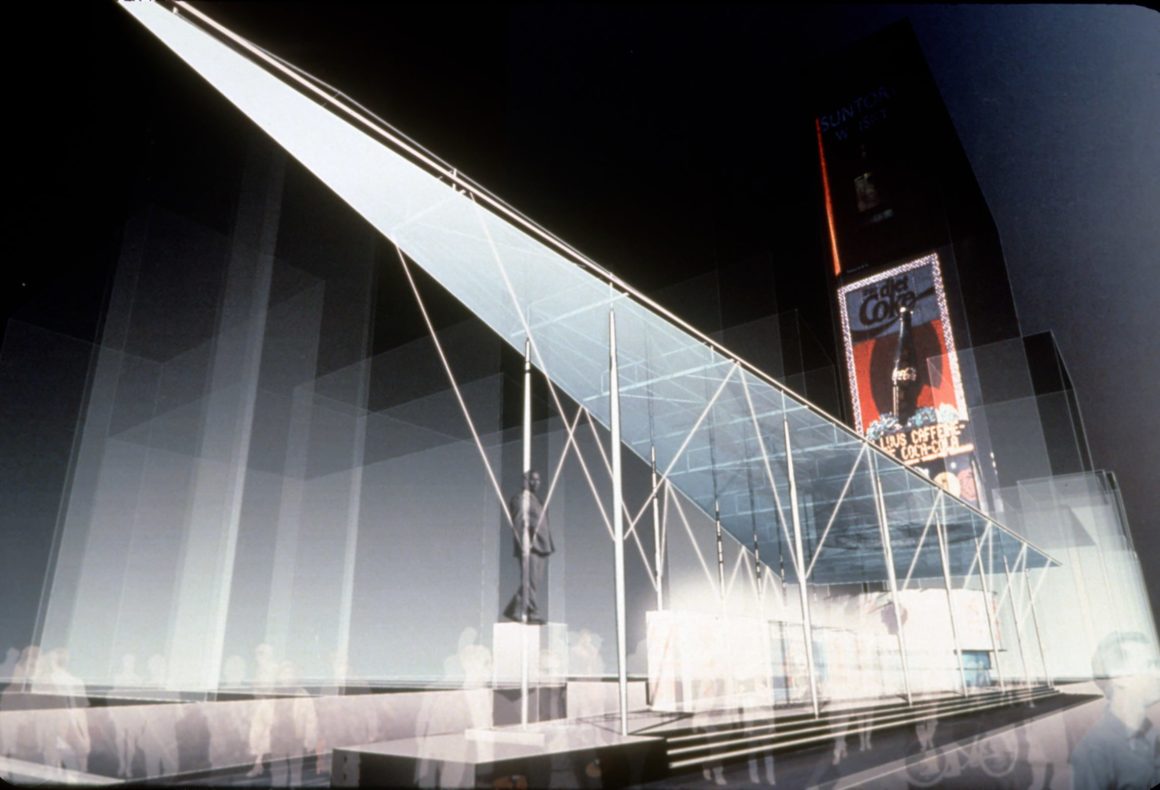 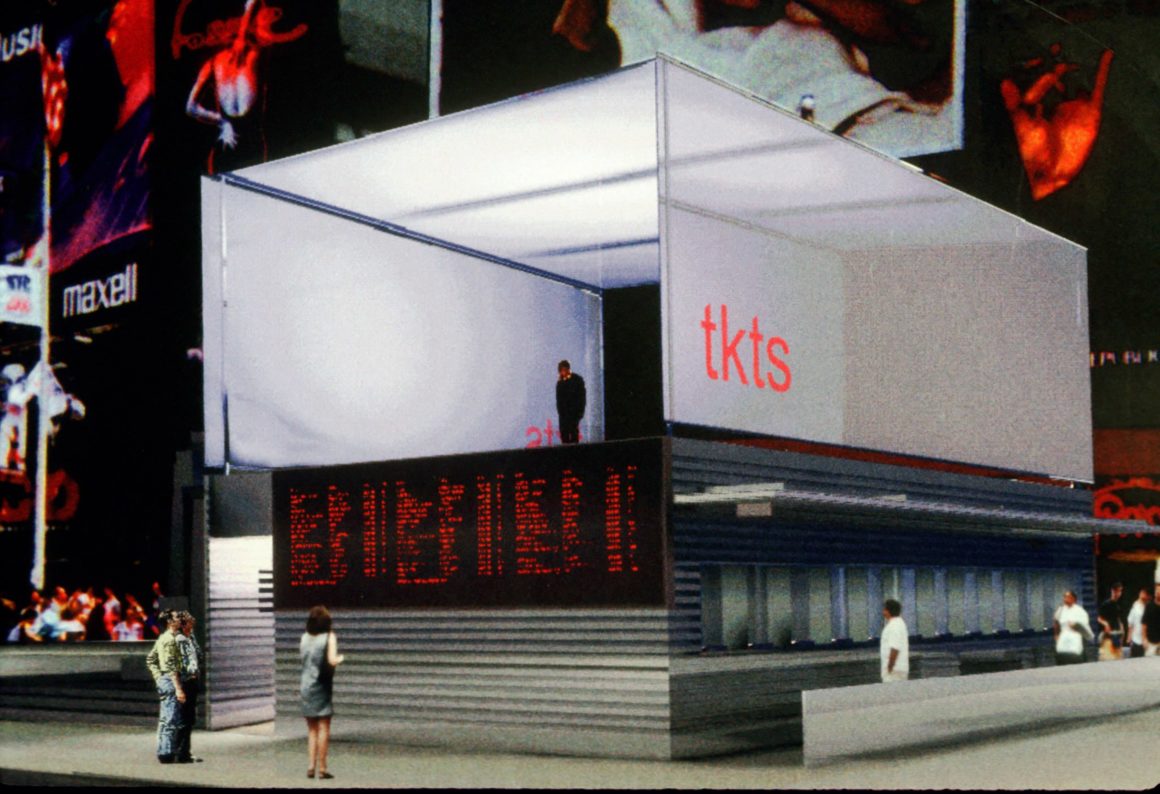 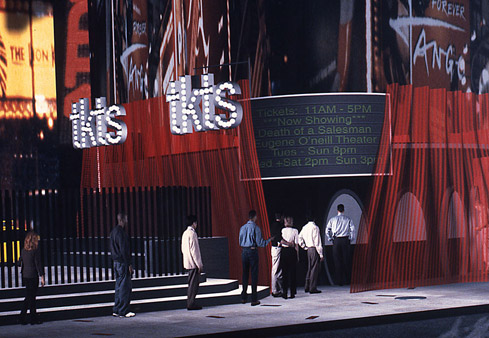 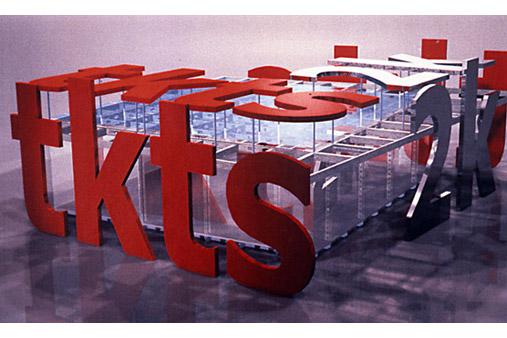 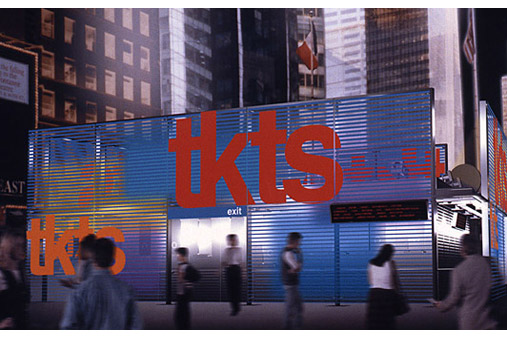 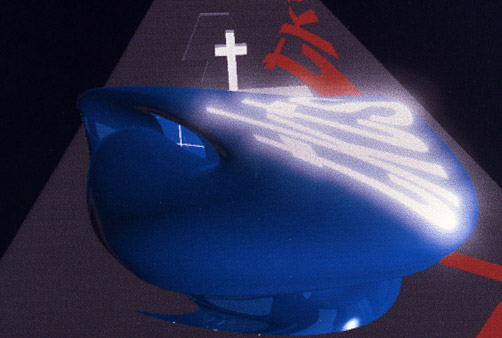